The Four Paths United Church is regarded as the oldest of the former Congregational Churches on the Island. http://ucjci.com/History 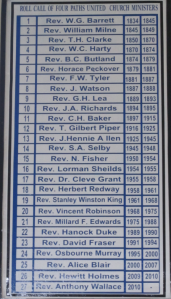 To the Glory of God and in Affectionate Remembrance of the Rev. W. C. BARRETT the FOUNDER of this Church and its beloved Pastor from 1835 to 1845 who died at Brighton, England 5th March 1865 aged 53 years.

Erected by their loving children MAY 1894