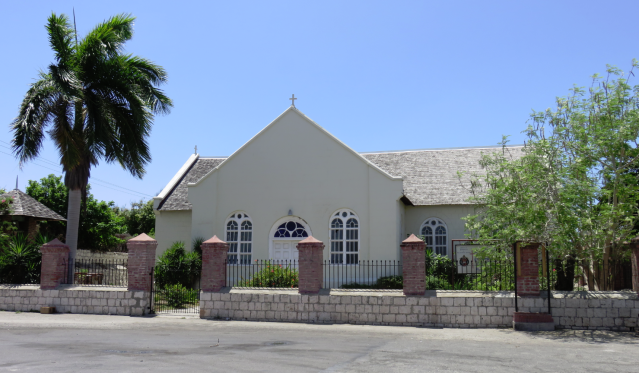 Here Lyes the Body of LEWIS GALDY Esq. who departed this Life at PORT ROYAL the 22nd December 1739 aged 80. He was born at MONTPELIER in FRANCE but left that Country for his Religion & came to fettle (settle) in this ISLAND where

He was fwallowed up in the Great Earth-quake in the Year 1692 & by the Providence of God was by another Shock thrown into the Sea & Miraculoufly favey by fwimming until a Boat took him up; He Lived many Years after in great Reputation Beloved by all that knew him and much Lamented at his Death.

This tombstone was moved to its present place in 1953 from Green Bay, together with

Underneath this stone lie interred the remains of Capt. Hutton DAWSON of the Royal Navy who fell a victim to a violent fever which in a few hours terminated his existence the 11th of February 1813 aged 21 years.

In this crypt lie the only marked remains of victims of the Earthquake that destroyed Port Royal in 1692.  Interred here are three children found under the walls of a brick building destroyed in the disaster.  They were recovered by underwater archaeologists from Texas  A & M University.  May they rest in peace.  Erected October, 1992 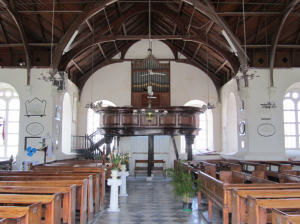 The original Black and white paving can still be seen inside the church.. 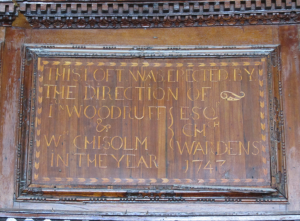 This loft was erected by  the direction of Jno. Woodruff & Wm. Chisholm Esqrs., Church Wardens in the year 1743

Lieutenant Joseph Andrew [….??? tablet broken], late commanding her Majesty’s Schoo….???.  He had served the country upwards of ……and died of Yellow fever on the 9th Feb…….age 49.

Sacred to the memory of the undermentioned Officers and Men of H.M.S. Leopard.

DIED FROM FEVER AT BELIZE

This tablet is erected by Captain William HOBSON, of his Majesty’s sloop, Ferret, to the memory of his nephew, Mr Thomas McGWIRE, late a midshipman of that sloop, who died of yellow fever on the 23rd Sept 1825 aged 15 years.  He was a youth whose virtues endeared him to all who knew him and rendered him the idol of his uncle’s heart.

To the memory of the Officers and Men of HMS Rainbow who died of fever whilst at Port Royal between the 31st July and 28th of October 1835.

In Memory of the undermentioned Officers and Men who died at Port Royal in the autumn of 1897.

Sacred to the memory of the undermentioned N. C. Officers and men of No 5 Batt. 10th Bde. R.A. who died at Jamaica during the year 1878.

Sacred to …. Lieutenant PHILIP FROWD, of the Royal Navy, who died here of the Yellow Fever April 15th 1804, in his twenty fourth Year.

Sacred to…..THOS: J. GRAHAM, M.D. and 16 Seamen of the Ship Pantaloon who died from fever between Belize and Jamaica.